I recently came across a new series on Netflix, “Halt and Catch Fire.” Seems to consider a lot of the themes we spoke about during our class.

Randomizing Someone Else’s Creativity as a Form of Creativity

A few nights ago, I saw a friend of mine from Utah, USA, whom I know from a previous video game charity event (Darkwing_Duck_SDA on Twitter), playing a randomized version of The Legend of Zelda.

For those of you who haven’t played the original Zelda for NES (I hope I’m not aging myself too badly as the resident LAW 423 geezer): the basic idea of the game is that you search a large (for the era) world for eight dungeons. In each dungeon, there is an item that helps you progress in that dungeon and future dungeons, as well as a boss monster guarding a magical artefact. Collect all eight artefacts, and you can enter the final (ninth) dungeon, beat the final bad guy, and save the princess.

While randomization per se isn’t difficult, randomizing the game in such a way that it can still be completed is very difficult. For example, in the original version of the game, you need the raft from one dungeon to sail across a narrow strait to reach the next dungeon. It would really stink if, in a randomized version, the entrance to dungeon N were put across that narrow strait, and the raft were located in dungeon N — oops, the game now can no longer be completed.

Take a look at all the constraints that the team who made the randomizer had to come up with to make the game as random as possible, while still guaranteeing that any given randomization (while potentially as frustrating as possibly imaginable) is still completable.

To me, that speaks to the designers imbuing this randomizer with an incredible amount of their own creativity. And, what can this randomizer do for Nintendo except attract a fresh set of eyes to an old game? To me, this is an amazing expression of fan-creativity in the video game / online world.

But, what do you think? 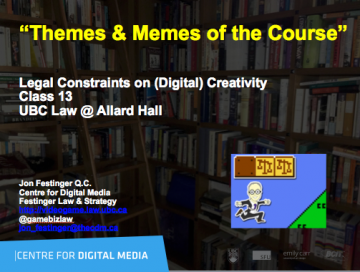 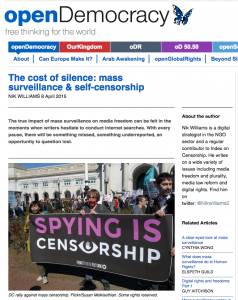 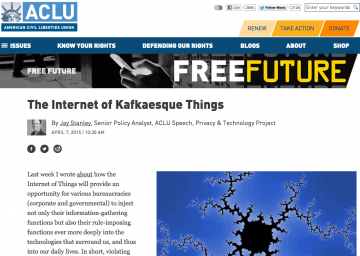 5. Taking Down Bigots With Their Own Weapons Is Sweet, Satisfying — And Very, Very Wrong: Actually, it’s about ethics in doxxing. 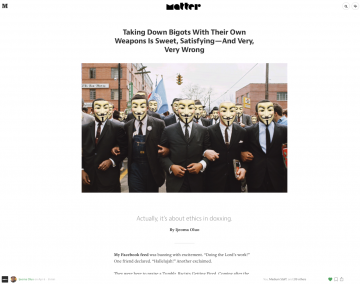 “Our experience is [piracy] leads to more penetration, more paying subs, more health for HBO, less reliance on having to do paid advertising… If you go around the world, I think you’re right, Game of Thrones is the most pirated show in the world. Well, you know, that’s better than an Emmy.”

Interestingly, the thesis seems to be that more exposure means more financial success, even where the exposure itself is not the exposure that the content creator intended.

It’s not immediately obvious from where the copies originated, though initial suspicion seems to centre on the copies having been leaked by some unknown reviewer.  Reviewers received the first four episodes in advance of the season premier.

Interestingly, the unknown source is not a difficult problem to sort-of solve* in advance of distributing the copies.  Steganography could be used to embed a symmetrically encrypted fingerprint (a secret value unique to each episode-reviewer 2-tuple) in each copy given out.

*Note: I said “sort-of” solve the problem.  A reviewer could just re-encode the copy to muddle or strip the fingerprint.  However, assume that reviewers were given digital copies (as opposed to physical copies that must be re-encoded before they can be distributed).  In this case, I theorize that most people wouldn’t bother to re-encode the copy before leaking it (human nature being what it is — path of least resistance, and all that).

There was an article in the Globe and Mail earlier this week about online shaming, including a discussion of sadism as an inherent character trail. I thought it tied in well to some of our discussions in class; plus, it’s an interesting read as a study break 🙂

Nintendo and We Play videos

Great interview with Elena Iosef by Amanda Lang about copyright and gameplay:

Here is the John Oliver interview with Edward Snowden that was mentioned in class today. Hilarious, sad, and insightful — all in one.

Amanda has asked me to post the following  readings for Tuesday. Please be forewarned that the second link is graphic in text and video. The irony of this warning given the context of the course will of course not be lost on anyone….

The 10 Most Disturbing Scenes in Anime History 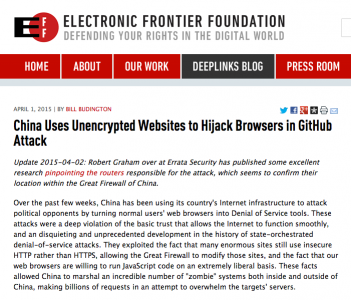 2. Ellen Pao’s Statement On Losing The Kleiner Perkins Case: “The Battle Was Worth It” 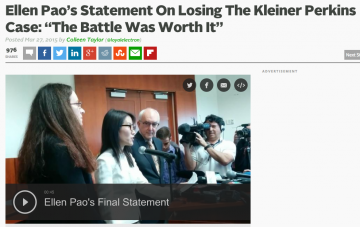 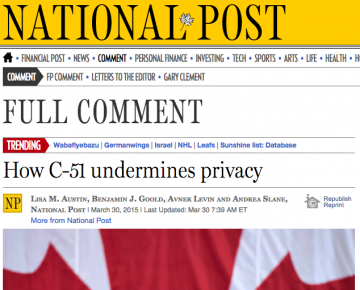 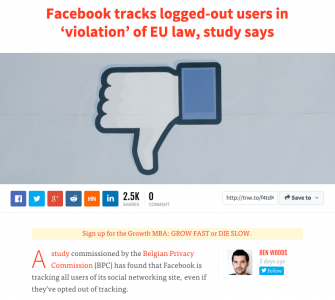 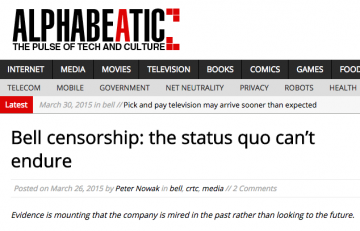